Blocking Calls: Why You Should Embrace the Sound of Silence

Blocking calls may at first seem almost counterintuitive to a small business owner. The whole POINT of running a small business is to get your name out there, talk to as many people as possible, get the word out. The whole point of blocking calls is to, well…NOT talk to people, and to keep words away from you. On the surface, it seems like the polar opposite of what someone who is trying to be a success in the business world would do. As the old saying goes, after all, all press is good press…so does that mean all calls are good calls?

Well, no, and you frankly do not have to be a small business owner to know that. Even ordinary folks who do not have a business of any size to run get all sorts of obnoxious calls from day to day- and some of those callers can be rather persistent. A small business owner can get those too, and in spades. Sometimes it can be enough to make you not even want to look at your phone, which obviously then has the rather deleterious effect of actually important calls, either from friends or even potential clients, being thrown away and ignored with the rest of the spam calls. Talk about throwing the baby out with the bathwater!

The chance of getting annoying calls is rather high. Having a (hopefully successful) small business (or a large one! Or a tiny one!) means your name is out there- which attracts more attention. And sometimes more attention is really good! But sometimes, not all of it is good. And for that sort of attention, there’s your handy dandy Block function.

That’s why we at MightyCall decided to put together a handy guide for blocking calls from start to finish:

So let’s get to the sound…of silence!

What exactly does blocking a call mean?

Blocking a call basically makes it impossible for that number to call you. Pretty straight-forward stuff. On most modern phones and telephony services, like MightyCall, blocking is super easy- barely an inconvenience. Oftentimes it can take less than a minute, or even seconds, once you learn how to go about blocking telephone numbers and calls. While we will definitely be getting to all of the details of how to do said blocking later, the important thing for you at the moment is to fully understand how effective blocking telephone numbers can be for you.

Because the thing is, blocking is for the most part, total and complete. While you can of course remove people from your blocked list—we’ll get to that as well—oftentimes, be it on social media or cell numbers, once you put someone on a blocked list, you usually forget they’re on it. You don’t really check the list regularly, because…well, why would you? It’s just a bunch of people who you found annoying enough to literally never want to talk to again. Frequently people go years without looking at their blocked list, only to see it again and realize that some people they blocked on a whim, some people they blocked for good reason, and some folks they can’t even remember how or why they ended up there in the first place.

But what that all means is that you don’t want to just block people for the heck of it, because they’re briefly annoying. Oftentimes you’ll never end up talking to that person again, and if they could be someone your small business might need in the future…well, maybe you might want to put up with them if they’ve only been annoying you for a short time.

You can block a call right from the MightyCall mobile app

Is it possible to get around blocked numbers?

By and large it does not really happen, primarily because most of the numbers you will end up blocking as a small business owner will be robocalls or spam callers- folks who call a thousand people a day and won’t really try to get around blocked calls since, hey, there’s other fish in the sea.

But you should be aware that it is technically possible to get around blocked calls, and if folks who are blocked are desperate to be annoying enough, they can get around them.

See, a phone “knows” to block numbers it has been told to block. But if it receives calls from unknown numbers, it does not know to block the number- because it literally cannot see it. And it turns out calling from an unknown number is…not altogether that difficult.

We are not going to go into detail how exactly one does such a thing—this is, after all, a blog on how to block calls, not get around them—but we will point out that, if someone blocks you, they probably don’t want to talk to you. Trying to purposefully get around that block repeatedly can easily land you on the wrong side of a civil suit or even a criminal suit, if your calls constitute harassment.

Is it legal to block calls?

Speaking of legality- is it legal to block someone’s phone calls? Is it legal for a business to do so? And in all cases? This is actually getting more attention than you would think. Whether or not it is legal for elected officials to block people—officials ranging from Congresswoman Alexandria Ocasio-Cortez to the President of the United States of America himself, Donald Trump—has even reached the judicial system, with multiple criminal and civil suits being brought against blockers, with some courts finding that officials who block citizens from viewing their tweets are violating the First Amendment.

However, if you are a small business owner, you can breathe easy. These rulings have all either a) dealt with extremely famous politicians, or b) dealt with those who are in elected office. Plus, these rulings are incredibly divisive and are by no means accepted by the legal community writ large.

Private individuals are free to block to their heart’s content. You may get an occasional nut who tries to claim some constitutional right to be as annoying as possible- that’s malarkey. Block away.

How do you block numbers with MightyCall?

Using MightyCall, blocking is super easy. On your MightyCall web panel, head to your call flows. There, in your call tree, in the section where you set where the call is coming from, you’ll have one of three options: Regular callers, VIP callers, and Blacklist callers. Clicking that will bring up the VIP/Blacklist menu. 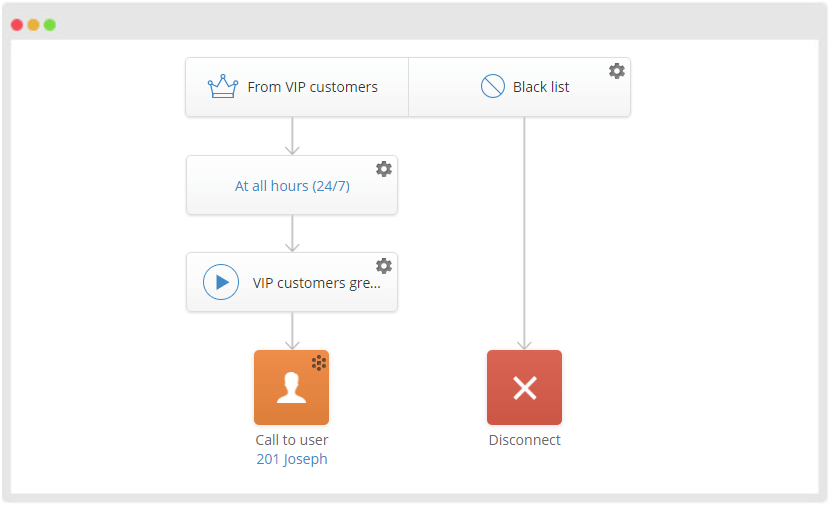 From there it is rather straightforward: you simply input the number you want to put on the blacklist, hit “Add number to list” if you’d like to add more, and then hit “Okay.”

That’s it. It is that straightforward. No jumping through hoops, no having to go through a ton of different settings. Just input the number, and that’s that.

Can you un-block numbers once you have put them on your blocked calls list?

Of course! On MightyCall’s web panel, in the same menu we mentioned before, next to all of the numbers on your block list—and hopefully, for your sake, there are not too many!—there is a little button labeled “Remove.” Yep. Just click that and hit “Okay” and bravo, the number is now free from the blocked list.

There is a word of caution here, however, and it’s one you should take into account: once a number is removed from the list, that’s it- it’s removed. It doesn’t go onto any sort of “List of Formerly-Blocked Numbers.” So if you have a number you are still uncertain about, don’t remove it just for the sake of removing it- or at least write it down, if you decide to remove it again in the future.

To block or not to block?

THAT is the question- and with MightyCall, it’s one you get to decide for yourself! Your small business’ time is important, and so is your and your employees time- not to mention your clients’! Don’t let your time on annoying robocalls and folks with nothing better to do than to try to scam or prank call others all day.

With MightyCall, you can get blocking today and keep putting together the building blocks of your business without having to answer “calls from the IRS” every five minutes. Don’t block the official IRS number though. You know, just in case.

Learn more: How to Stop Robocalls on iPhone — read this carefully before selecting the anti-robocall option on your iPhone.

From mobility and technical features to integrations and privacy, here are 10 key features to look for in a business phone system for small business owners in 2021.

NPO South Metro Medical Equipment Loan Closet: “Do good to as many people as you can, in as many ways as possible.”

When the owners of Simple Stroller Rental read about the Google Graveyard, they knew they had to find something better than Google Voice. Quickly too, before Google abandoned yet another failed experiment. This was a big deal to Simple Stroller Rental because it got a good chunk of its business from Disney World vacationers through its phone number. Said William Schinagl, Co-Owner…

In a world unthinkable without apps for every life task and event, mobile VoIP apps take the pedestal of business communications. Here are the pros and cons of today’s market leaders.